They compelled a passer-by, who was coming in from the country, to carry his cross; it was Simon of Cyrene, the father of Alexander and Rufus. Then they brought Jesus  to the place called Golgotha (which means the place of a skull).  And they offered him wine mixed with myrrh; but he did not take it.  And they crucified him, and divided his clothes among them, casting lots to decide what each should take. It was nine o’clock in the morning when they crucified him.  The inscription of the charge against him read, ‘The King of the Jews.’  And with him they crucified two bandits, one on his right and one on his left.  Those who passed by derided him, shaking their heads and saying, ‘Aha! You who would destroy the temple and build it in three days,  save yourself, and come down from the cross!’  In the same way the chief priests, along with the scribes, were also mocking him among themselves and saying, ‘He saved others; he cannot save himself.  Let the Messiah,  the King of Israel, come down from the cross now, so that we may see and believe.’ Those who were crucified with him also taunted him. 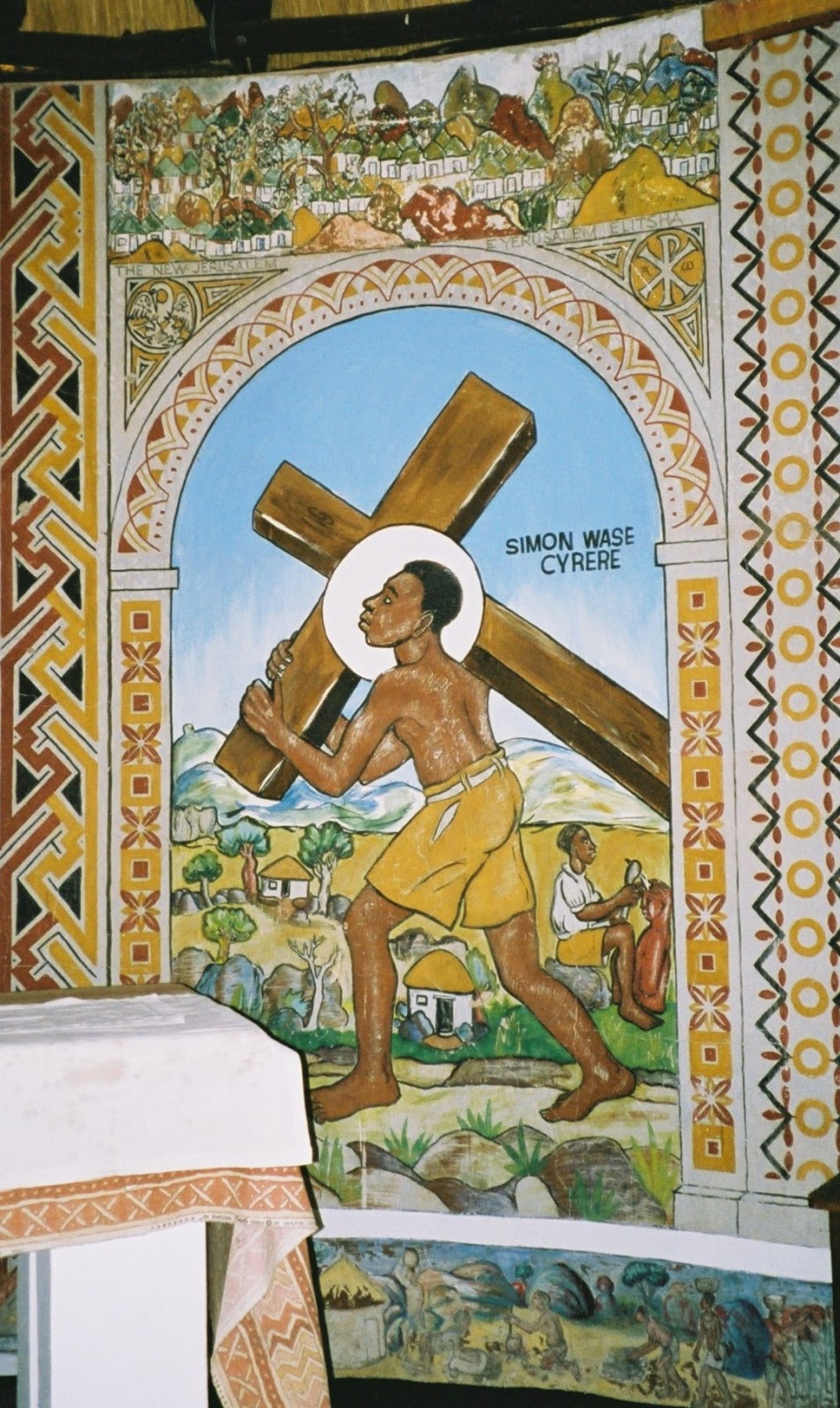 This Maundy Thursday, I find myself drawn to the character of Simon of Cyrene.

During a trip to Zimbabwe in 2002, I was able to visit Cyrene Mission, on the outskirts of Bulawayo; founded in 1939 by Edward ‘Ned’ Patterson, who was a pioneering art teacher. It was the first African school in Rhodesia (now Zimbabwe) to have art classes. The chapel is full of the most beautiful murals and sculptures by the students, depicting moments in the life of Jesus, including an image of Simon of Cyrene set behind the altar (see attached, taken in 2002).

Ned’s intention was that all students could be independent, ‘able to care for his cattle, able to build his own home and to make it’s furniture and even to enrich them by carving and design.’

Simon carrying the Cross is the 5th Station of the Cross and he is often portrayed undertaking an act of sympathetic generosity, but there is no Biblical basis for this. Simon’s encounter appears in all three Synoptic Gospels (Matthew, Mark and Luke) with him being ‘compelled’ to carry the Cross – we might ask ourselves why:

In the image from Cyrene Mission, Simon is carrying a cross through scenes of daily Matabele life. In our daily lives, in our culture and world, we will likely find ourselves forced to carry crosses not of our own making: stereotypes and injustices that have been heaped on our shoulders.

Before Jesus is crucified, he, the one who has washed our feet, will pick these crosses up again, saving us from their weight, freeing us to care for our cattle and to enrich our lives with creativity…and yet he is taunted and abused.

Emmanuel, God with us,
today we choose to walk with you aware of the burden you carry.
We choose to walk with Simon
aware of the burdens we all carry, put on our shoulders by others.
We mourn this injustice, giving thanks for those who take and release the strain for us
and for your showing us that there is life beyond such unjustified torment. Amen