In the first book, Theophilus, I wrote about all that Jesus did and taught from the beginning until the day when he was taken up to heaven, after giving instructions through the Holy Spirit to the apostles whom he had chosen. After his suffering he presented himself alive to them by many convincing proofs, appearing to them over the course of forty days and speaking about the kingdom of God. While staying with them, he ordered them not to leave Jerusalem, but to wait there for the promise of the Father. ‘This’, he said, ‘is what you have heard from me; for John baptized with water, but you will be baptized with the Holy Spirit not many days from now.’ So when they had come together, they asked him, ‘Lord, is this the time when you will restore the kingdom to Israel?’ He replied, ‘It is not for you to know the times or periods that the Father has set by his own authority. But you will receive power when the Holy Spirit has come upon you; and you will be my witnesses in Jerusalem, in all Judea and Samaria, and to the ends of the earth.’ When he had said this, as they were watching, he was lifted up, and a cloud took him out of their sight. While he was going and they were gazing up towards heaven, suddenly two men in white robes stood by them. They said, ‘Men of Galilee, why do you stand looking up towards heaven? This Jesus, who has been taken up from you into heaven, will come in the same way as you saw him go into heaven.’

Today, the URC Daily Devotions begin to read through the Acts of the Apostles, and I bring you a couple of thoughts inspired by Greater Manchester.

Running from Manchester eastwards is the M67 motorway – originally planned to reach Sheffield, but never finished. It comes to a rather abrupt end in the village of Mottram, and all the traffic is funnelled into a single-carriageway road.

The New Testament begins with a four-lane motorway-like experience: we have four Gospel accounts which take us in the same direction. Some folk like the fast-lane, fast-pace of Mark’s Gospel; others prefer the slow-lane, more reflective John’s Gospel; or we switch lanes and Gospels as our mood and God’s Spirit lead us.

With the Acts of the Apostles, we get the one version, just like the single lane through Mottram. An opportunity for us to slow down and revisit the early church and how God was at work, bringing the Good News of Jesus beyond ancient Israel into the whole world! 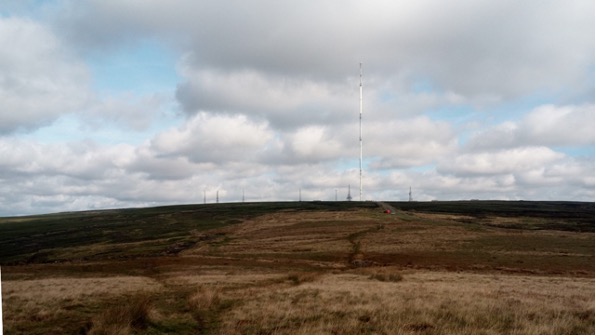 Winter Hill is the highest point in Greater Manchester and on top of it stands a huge transmitter (309m/1013’). On sunny days, one can see Winter Hill clearly from many miles away; but very often, the mast is hidden in cloud.
The TV and radio signals which come from the Winter Hill transmitter are there whatever the weather, even if we cannot see the transmitter itself because it is obscured in cloud. And so it is with Jesus in the Ascension: He disappeared from the Disciples’ sight into the clouds. Even though we cannot see Jesus, His presence remains with us.

P.S. Who was “Theophilus”? We don’t know, but the name means “Friend of God” – so perhaps, in a way, the Acts of the Apostles is addressed to us all!